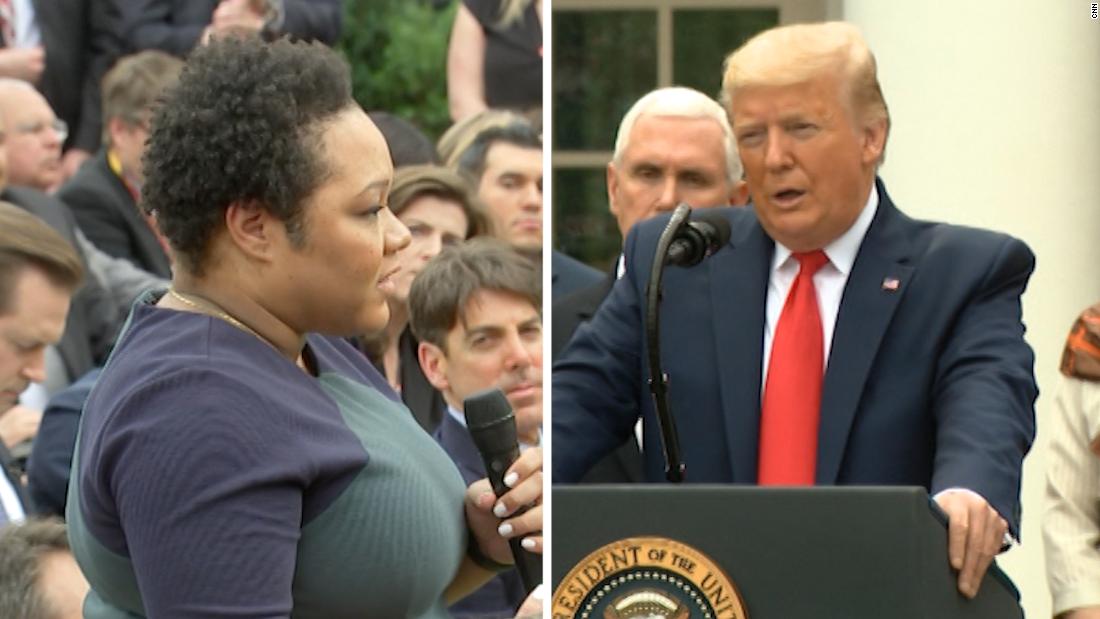 Trump told Yamiche Alcindor he didn’t “know anything about” the elimination of the Global Health Security team by his former national security adviser.

President Donald Trump lashed out at a PBS reporter on Friday when she challenged him about the shutdown of a pandemic response unit within the National Security Council in 2018.

After calling journalist Yamiche Alcindor’s question “nasty,” the president claimed he knew absolutely nothing about the topic — and cut her off.  Sen. Sherrod Brown (D-Ohio) quickly attempted to jog Trump’s memory by posting a letter on Twitter he’d sent the president nearly two years ago complaining about the Trump administration move.

Trump’s former national security adviser John Bolton dissolved the NSC’s Global Health Security team in a controversial decision widely covered by the media. The Obama administration had established the unit after the Ebola outbreak to coordinate the U.S. government’s response to a pandemic.

Alcindor, of “PBS NewsHour,” asked Trump to reconcile the elimination of the pandemic team with his insistence Friday that he takes no responsibility for a critical dearth of testing in the U.S. fight against coronavirus. She noted that officials who had worked in the unit said the White House “lost valuable time” without it.

Alcindor pressed: “You don’t know about the reorganization that happened at the National Security Council?” Trump responded: “It’s the administration. Perhaps they do that ... let people go. You used to be with a different newspaper than you are now, you know things like that happen.”

Trump also praised himself, claiming that his top health expert Anthony Fauci, director of the National Institute of Allergy and Infectious Diseases, has said “innumerous times we’ve saved thousands of lives because of the quick [border] closing.”

Fauci testified before a House subcommittee on Thursday that the ongoing shortfall of coronavirus testing in the U.S. was “a failing.” The “idea of anybody getting it [testing] easily the way people in other countries are doing it, we’re not set up for that. Do I think we should be? Yes.”

When another reporter asked Trump on Friday if he took responsibility for that “failing,” he responded: “Yeah, no, I don’t take any responsibility at all.” He claimed he was hamstrung by “circumstances” and “regulations” and aims to finally ramp up testing now.

In a tweet, Alcindor defended her question as “relevant, fair and truth-seeking.”