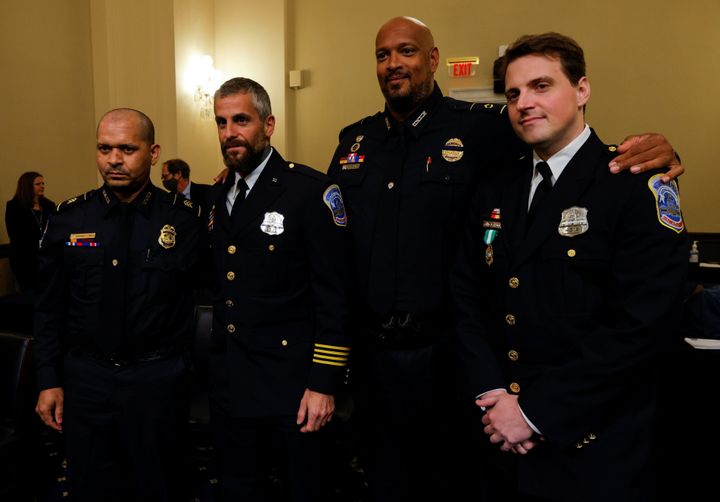 The nation’s highest congressional honor will be given to the U.S. Capitol Police and D.C.’s Metropolitan Police Department.

President Joe Biden signed a bill Thursday to award Congressional Gold Medals to police departments that responded to the deadly Jan. 6 attack on the U.S. Capitol.

The Gold Medal, the nation’s highest congressional honor, will be awarded to the Capitol Police and to Washington, D.C.’s Metropolitan Police Department. A third Gold Medal will be given to the Smithsonian Institution, to be put on display with a plaque that lists all the law enforcement agencies that defended the Capitol. A fourth will be awarded to the Architect of the Capitol, the federal agency that maintains the building.

Biden signed the bill following a unanimous vote in the Senate on Wednesday to move forward with the honor. Senators voted unanimously in February to give a Gold Medal to Capitol Police Officer Eugene Goodman, who was captured on video by HuffPost’s Igor Bobic leading a violent mob of Donald Trump supporters away from the Senate chamber the day of the attack.

Five people died during or soon after the attack, and 140 officers were injured. Four officers later died by suicide. Testimony given by multiple officers who responded to the attack described the racism and violence that permeated that day.

“No one had ever ― ever ― called me a ‘n****r’ while wearing the uniform of a Capitol Police officer” until Jan. 6, Capitol Officer Henry Dunn said during July testimony to a House select committee investigating the attack.

During a ceremony for the bill signing on Thursday, Biden praised the responding officers, and described the attack as an insurrection.

“I know each time you put on that shield in the morning, whenever you show up for work, you families wonder whether they’re gonna get a call that day, a call they don’t want to receive, hoping you’ll come home safely,” Biden said. “It breaks my heart. It breaks the heart of the nation, to remember you were assaulted by thousands of violent insurrectionists at the Capitol of the United States of America.”

In June, the House bill to award the Gold Medals was approved by 406 lawmakers of both parties and opposed by 21 Republicans. Sen. Majority Leader Chuck Schumer (D-N.Y.) blasted those GOP holdouts earlier this week.

“The same folks who screamed the loudest about the dangers of defunding the police refused to defend the police, the very police that shielded them from the vicious mob on January 6,” Schumer said. “For the life of me, I don’t know how they sleep at night.”

Despite the accolades, plenty of controversy still surrounds the police response on Jan. 6. The Capitol Police rejected offers of additional help before the attack despite warnings of potential violence, and a Senate report from June detailed sweeping law enforcement failures surrounding the attack. The Capitol Police also launched an investigation of dozens of its own officers over their actions on Jan. 6 and suspended six of them in February.