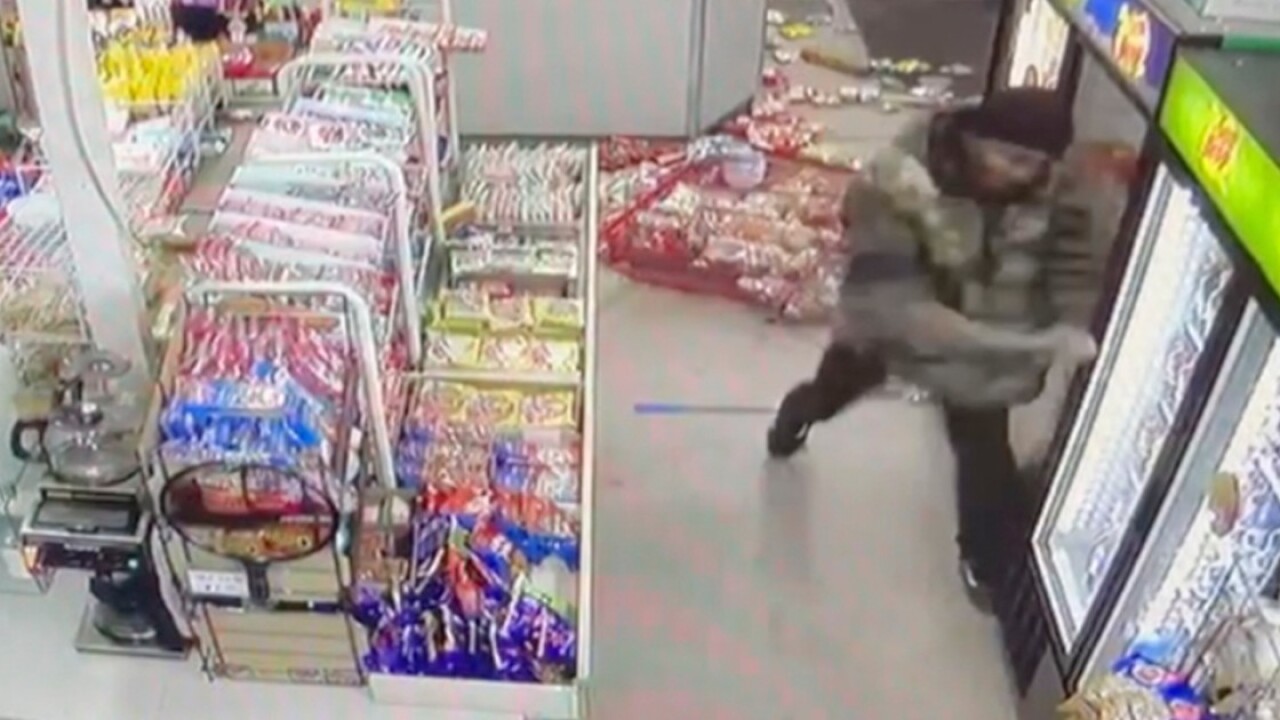 An Asian-owned convenience store in Charlotte, North Carolina, was trashed by a man who wielded a metal post and yelled racial slurs, according to police and a son of the store's owners.

Surveillance footage shows a man pulling a merchandise rack to the floor and swinging a street sign post into the glass of the refrigerators. A man who appears to a friend of the attacker cheers him on.

The attack occurred Tuesday at a store called Plaza Sundries that is downtown near Charlotte's main transit hub. And it falls in the wake of an attack on a woman of Asian descent in New York City and the fatal shooting of eight people at three Atlanta-area massage businesses. Six of those victims were women of Asian descent.

Despite the increase in attention on such attacks, the violence and racially charged language was nothing new, said Mark Sung, whose parents own the store, and his wife Grace Lee Sung.

“When my husband got the call (about the attack), it was like a routine,” Lee Sung said. “He was like, ”Okay, check the mess. See the surveillance. File the (police) report."

The pandemic has fueled the tension, the couple said, with some people blaming the coronavirus on the store's owners. They have lived in the U.S. for decades since moving from South Korea.

“It's like, ‘Hey, you’re different,'” Lee Sung said, offering a sanitized summary of the insults. “’You obviously can’t be from around here. Go back to your country.'”

But the owners have experienced a different sentiment in the days since the attack: A woman arrived at the store and gave the owners soup. A pizza deliveryman showed up with five pies. A local doctor dropped off a check. More than $30,000 has been raised through GoFundMe to cover the store's damage.

“My in-laws are more shocked that people actually care than they were about the (attack)," Lee Sung said. "And it took them a while to process why they were getting so much attention.”

Charlotte-Mecklenburg Police said a company that's responsible for security at the transit center arrested Xavier Rashee Woody-Silas, The Charlotte Observer reported. He was arrested for robbery with a dangerous weapon, communicating threats, disorderly conduct, injury to personal property and resisting a public officer, according to public records. It's unclear if he's hired an attorney who could comment on his behalf.

Hate crimes nationally against Asian Americans and Pacific Islanders have increased 150% during the pandemic, according to a study by the Center for the Study of Hate and Extremism at California State University, San Bernardino.

The outpouring of support for the store's owners is making them “feel heard,” Lee Sung said of her in-laws.

“My mother in law can’t stop crying every time someone says, 'I’m so sorry for what you’re going through,” she said. “It’s just a reminder that — wow, things are not supposed to be this way.”

But the family is being cautious moving forward.

“She’s also scared because she is not used to all this attention,” Mark Sung said of his mother. “So, she’s also kind of nervous. ... We’re just trying to be careful.”