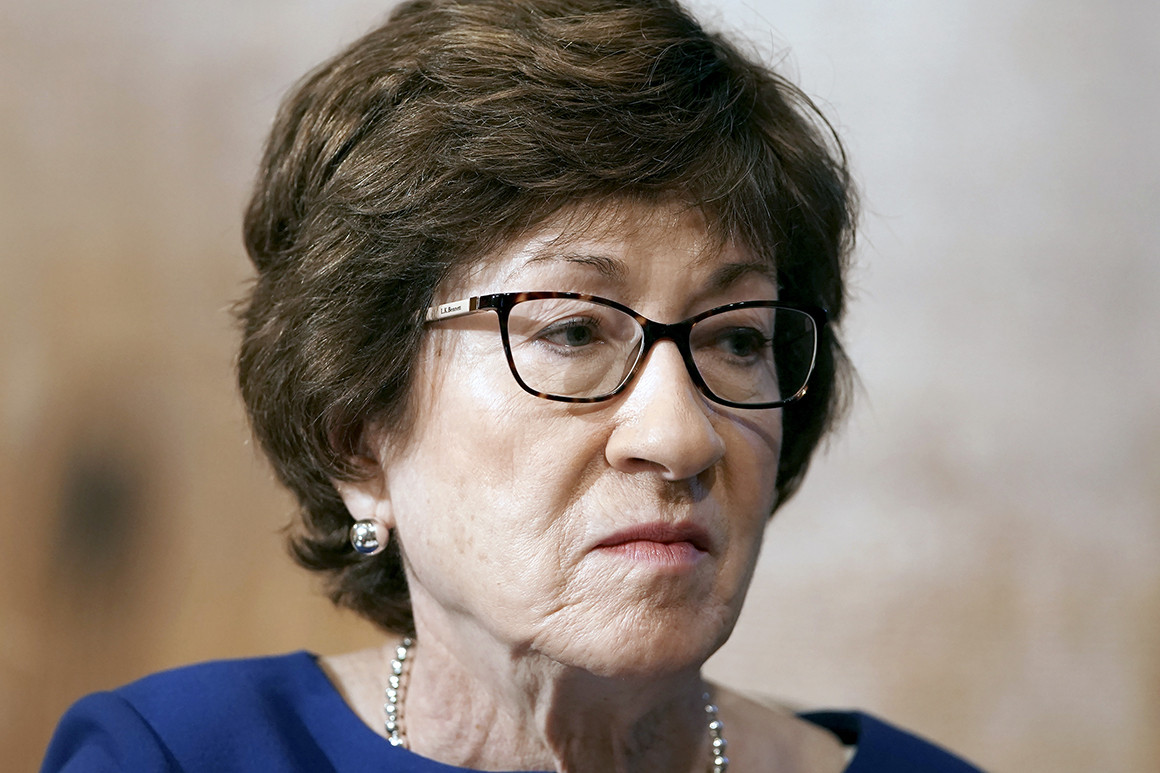 Vulnerable Republicans are increasingly taking careful, but clear, steps to distance themselves from President Donald Trump, one sign of a new wave of GOP anxiety that the president's crisis-to-crisis reelection bid could bring down Senate candidates across the country.

In key races from Arizona to Texas, Kansas and Maine, Republican senators long afraid of the president’s power to strike back at his critics are starting to break with the president — particularly over his handling of the pandemic — in the final stretch of the election. GOP strategists say the distancing reflects a startling erosion of support over a brutal 10-day stretch for Trump, starting with his seething debate performance when he did not clearly denounce a white supremacist group through his hospitalization with COVID-19 and attempts to downplay the virus's danger.

Even the somewhat subtle moves away from Trump are notable. For years, Republican lawmakers have been loath to criticize the president — and have gone to great lengths to dodge questions — fearful of angering Trump supporters they need to win. But with control of the Senate in the balance, GOP lawmakers appear to be shifting quickly to do what’s necessary to save their seats.

Republican prospects for holding its 53-47 majority have been darkening for months. But recent upheaval at the White House has accelerated the trend, according to conversations with a half-dozen GOP strategists and campaign advisers, some of whom spoke on condition of anonymity because they were not authorized to disclose internal deliberations.

The strategists noted the decision to rush to fill the Supreme Court vacancy with conservative judge Amy Coney Barrett has not swung voters toward the GOP as hoped. Several noted internal polls suggested Republican-leaning, undecided voters were particularly turned off by the president’s debate performance and his conduct since being diagnosed with the coronavirus. It wasn’t clear that these voters would cast a ballot for Democrat Joe Biden, but they might stay home out of what one strategist described as a feeling of Trump fatigue.

“I think a lot of Republicans are worried that this is a jailbreak moment, and people who have been sitting on the fence looking for a rationale to stick with the president are instead abandoning the ship,” said Rory Cooper, a Republican strategist and frequent Trump critic.

To be sure, Trump has a history of political resilience. Wednesday marked the four year anniversary of the release of the “Access Hollywood” tape, in which Trump boasted of sexually assaulting women. Republicans quickly abandoned him then, and his poll numbers sunk, but he still won weeks later.

Trump's behavior this week hasn't prompted that sort of GOP rebuke. But Republicans expressed clear frustration with Trump’s erratic approach to negotiations on a stimulus bill aimed at mitigating the economic toll of the pandemic. Trump abruptly called off talks, then tried to restart them Wednesday, causing the stock market to plummet and then somewhat recover.

On Monday, as he returned from the hospital, a still-contagious Trump paused for a photo op at the White House, removed his mask and later tweeted that people should not fear the virus that has killed more than 210,000 Americans.

“I couldn’t help but think that sent the wrong signal,” said Sen. Susan Collins, R-Maine, whose tight race is among a handful that could cost Republicans control of the Senate. “I did not think that it set a good example at all.”

Collins began airing an ad this week that urges voters to vote for her “no matter who you’re voting for for president." 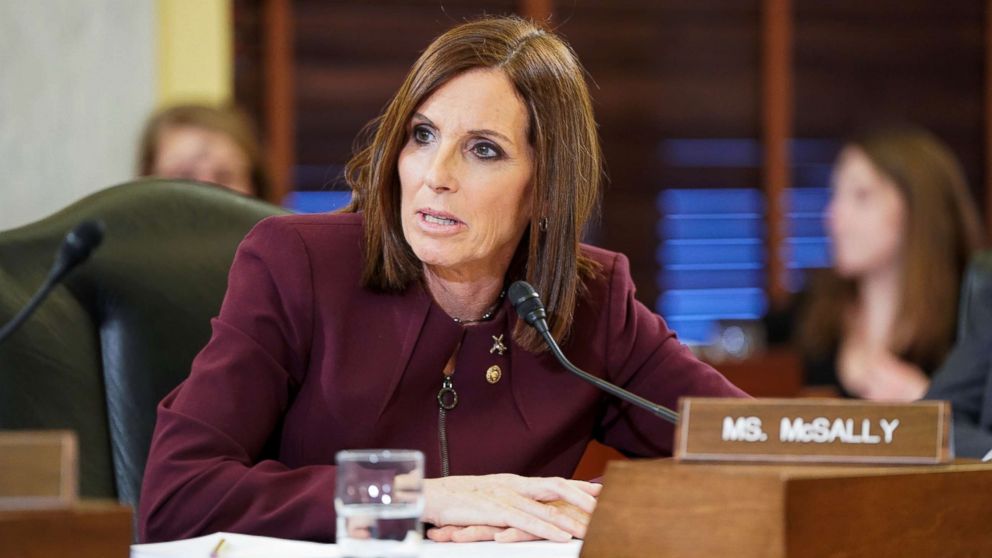 In Arizona, another endangered Republican, Sen. Martha McSally, struggled when asked whether she was proud to serve under the president during her Air Force career.

“I’m proud that I’m fighting for Arizonans on things like cutting your taxes,” McSally replied during a debate against Mark Kelly, one of multiple Democrats who have bested their Republican incumbents in fundraising.

Democrats have long considered Maine and Arizona, along with Colorado and North Carolina, top targets in their effort to gain the four seats they need to win Senate control. (It's only three if Biden wins the White House.) But the race for Senate majority has been widening into reliably Republican states, now including Iowa, Alaska, Kansas and Montana. In North Carolina, meanwhile, Democrat Cal Cunningham's recent sexting scandal has complicated his drive against Republican incumbent Thom Tillis. 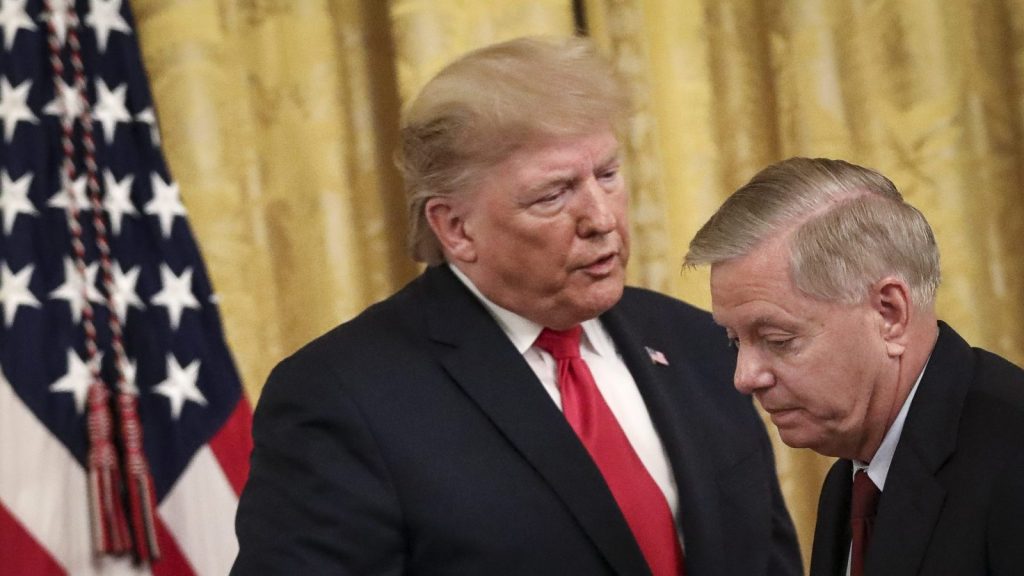 Donors have not given up on trying to hold the Senate. As Trump’s fundraising has plateaued in recent months, it has spiked for Republican outside groups that are supporting House and Senate candidates.

The massive influx of new money for House and Senate committee will enable them to flood competitive races with advertising that embraces conventional Republican themes. (The South Carolina TV ad by the Senate Leadership Fund shows pictures of Senate Minority Leader Chuck Schumer and House Speaker Nancy Pelosi and says, “Liberal Jaime Harrison is their guy, not ours.”)

The intention is to extend a lifeline to candidates who otherwise would have relied on the president’s political operation for support, according to two Republican strategists with direct knowledge of the House and Senate campaign plans.

Still, there's little doubt Republican senators' fortunes are linked to the president and his volatile political instincts. In the highly partisan environment, ticket-splitting — voting for one party for president and another for Senate, say — has become increasingly rare. In 2016, Republican Senate candidates lost in every state Trump lost and won where Trump won.

One GOP adviser said most Republican candidates are not running ahead of Trump in polling their states. And when his support drops, their support usually does, too.

Even in red states, Republicans are starting to make clear they aren't following Trump when it comes to the pandemic.

Sen. John Cornyn told the Houston Chronicle editorial board on Monday that Trump “let his guard down" and said his diagnosis should be a reminder to "exercise self-discipline.”

In another GOP bastion, Republican Senate nominee Roger Marshall borrowed Trump's slogan for a “Keep Kansas Great” bus tour on Tuesday, but not his health advice.

“Of course, I think everyone should respect the virus,” said Marshall, a doctor. “I’m really encouraging everyone to wear a mask when they can, to keep their physical distance, wash their hands, all those types of things.”

Marshall was quickly reminded of his party's competing forces. As he spoke, he was briefly interrupted by a woman who appeared to be a opponent of wearing masks, yelling, “Stop telling people that!”