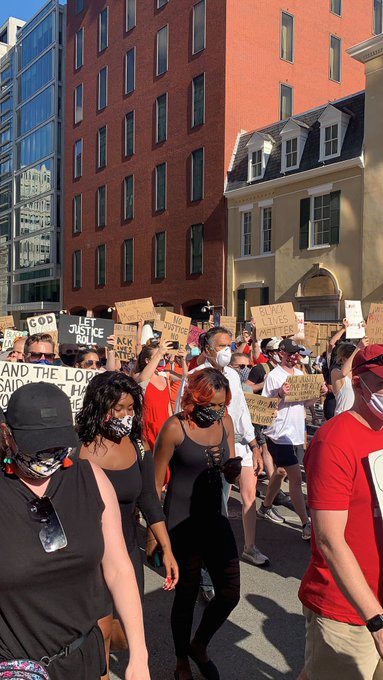 “We need to stand up and say, ‘Black lives matter,’” said the senator and 2012 GOP presidential nominee, one of the few prominent Republicans to support the protests.

Sen. Mitt Romney (R-Utah) on Sunday showed his support for the anti-racism protests in response to the police murder of George Floyd by joining a Black Lives Matter march in Washington, becoming one of the few Republican lawmakers to do so.

“We need many voices against racism and against brutality,” Romney told NBC News, as he marched with a group of Christians along Pennsylvania Ave. in the direction of the White House. “We need to stand up and say, ‘Black lives matter.’”

The Utah senator and 2012 GOP presidential nominee is one of the few Republican leaders to publicly show support for the protesters. Most Republicans have stood by President Donald Trump, who has repeatedly maligned the protesters and called for military action against them.

Last week, Trump ordered police to tear gas protesters, including religious leaders, in front of the White House — moments before staging a photo-op at a nearby church.

On Saturday, Romney tweeted a photo of his father, then-Michigan Gov. George Romney (R), participating in a civil rights march in the 1960s.

As New York Times reporter Nikole Hannah-Jones pointed out Saturday, the elder Romney faced much criticism from his white constituents for his support of the civil rights movement.

In 1969, when he became housing and urban development secretary under President Richard Nixon, he advocated against housing discrimination and promoted policies for more integrated housing, including the Fair Housing Act. He launched an initiative called Open Communities, forcing white communities to integrate by rejecting applications for infrastructure projects if leaders were using discriminatory housing practices. But Nixon shut down the initiative and eventually ousted him from his administration.